Learn how to automatically assign and distribute deals and Leads in Pipedrive CRM based on round-robin logic, location, and business rules.

Pipedrive Automation and other third-party tools like Zapier, Routerjet, Mapsly, etc. allow for automated deal assignment or automated deal distribution so that they can be acted on quickly. This post is a deep dive into setting up the right process for distributing/assigning/routing deals in Pipedrive CRM depending on the business case and sales process requirements.

What it means is you cannot afford to waste any time in contacting an enquiry, and you should act on the enquiry as soon as it lands in your pipeline. And for that to happen, you cannot waste any time deciding ‘who’ in your team to take on a new enquiry.

Business owners and sales leaders, therefore, need to consider options to configure a CRM like Pipedrive so that one of the biggest determinants of sales conversion isn’t a bottleneck.

Click here (affiliate) to get an extended 30-day FREE trial of Pipedrive. 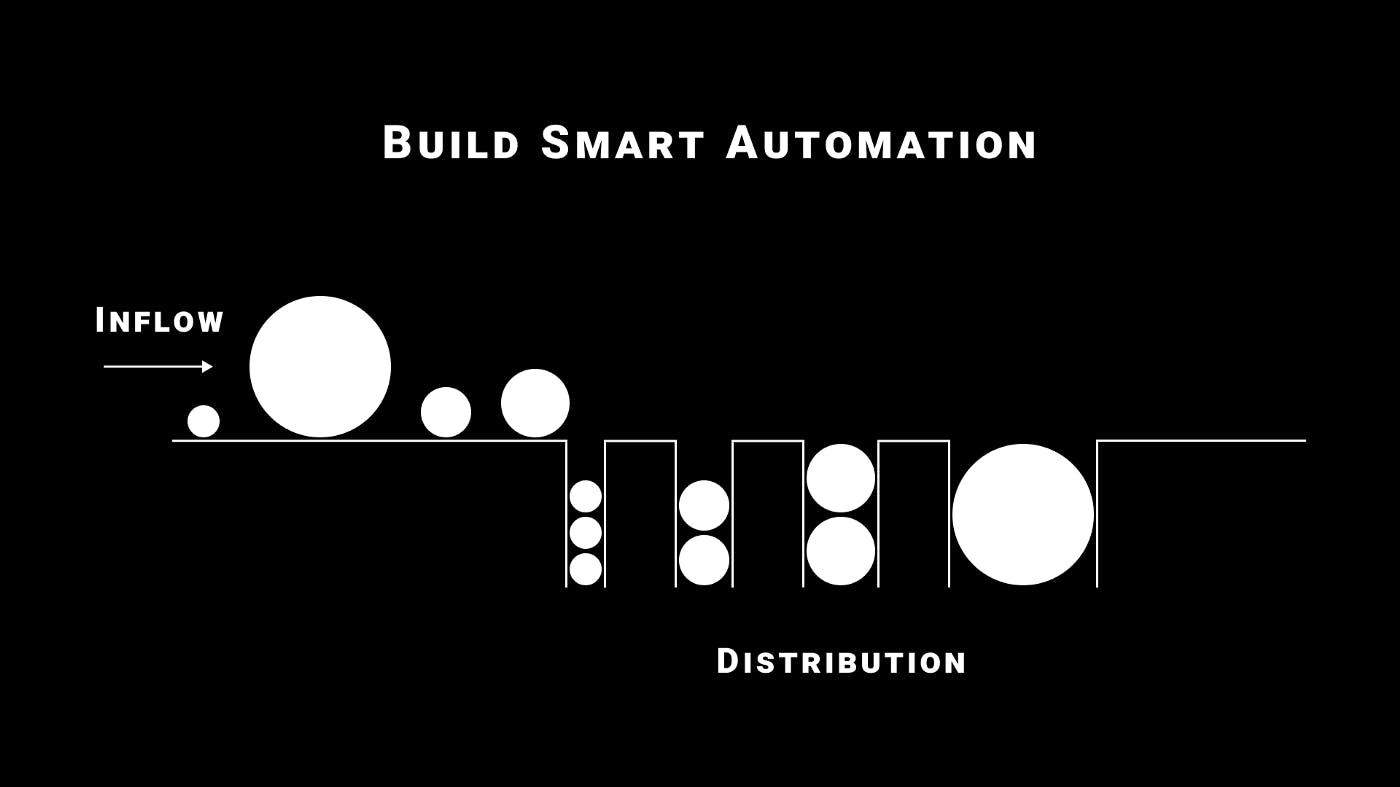 Automated assignment of deals or automated deals distribution is one of the most overlooked aspects of CRM solutions. There is no out-of-the-box solution to manage deals assignments in most CRMs. Therefore, many decision-makers don’t even know that this process can be automated.

The solution for automated deals assignment depends on various factors:

The factors could be many, but the core methods to implement automated deals assignment based on these factors are only a few. It, therefore, becomes important to understand these factors and understand what they translate to in terms of implementation.

When you have a number of salespeople working on your team, and when you have hundreds of enquiries coming in every day, as a business leader, the following questions become crucial:

If you're looking for a deep dive into the philosophy behind this setup suggestion, I have covered it in this article: 'How to set up Pipedrive Activities for Productivity'.

Once your deals are in Pipedrive, your next big challenge is to assign them to the right salesperson. The process of deals assignment is also popularly known as lead routing. While the former is notionally manual in nature, the latter has a sense of automation attached to it.

Zapier finds/creates a Person with the email submitted in the enquiry. We then create a new deal associated with that Person. My article on 'How to link a Deal with a Person and an Organization in Pipedrive' covers this setup in detail.

To evaluate which automation tool to use for your Pipedrive CRM setup, read this detailed article about all the addons that could help you improve your Pipedrive system.

Let’s see the scenarios and the recommended solution in order of complexity.

Assigning Deals in Pipedrive in a One-man Team Scenario

When you’re the only person on the team, there is no decision to be made. In the Zapier setup, you can assign the deal to yourself as part of the zap definition in Zapier.

Manual Deals Assignment in Pipedrive in a Team Scenario

You can employ one person whose only job is to decide who is assigned the newest deal in the pipeline. In this scenario, you can follow the same steps described above and assign all deals to this one person. This person’s job is then to assign these deals, one by one, to a salesperson in your team, in Pipedrive. You can never tell how effectively and efficiently this person is assigning deals to salespeople though. Besides, it is a huge bottleneck since it requires manual intervention every time, and it could become a single point of failure for your team when this person is not available 100%, mentally and physically.

In the absence of well-defined criteria to distribute deals, a round-robin deal assignment or deal distribution is the fairest method of assigning deals to your sales team. Round robin deal routing is also effective when all deals are more or less the same and there is no significant difference in terms of value or opportunity between the deals. Besides, it doesn’t matter much if there is a slight difference between the deals in terms of monetary value. In the long run, it all averages out if you stick with a round-robin distribution strategy long enough. Lastly, you can always create individual pools by defining segments for round-robin assignments.

You cannot assign deals using the round-robin method in Pipedrive. You have to use a 3rd party tool to accomplish this. Of all the tools I have tried, I found RouterJet to be the most efficient and elegant deals assignment tool for round-robin allocation in Pipedrive CRM.

Many sales teams are organized to suit the sales process, which is designed to suit customer requirements.

The factors on which the deals can be categorized are often indicated by the customer. If a customer is filling out a contact form on your website, you can capture these factors as part of the form. This is also true when customers submit a lead generation form after seeing an advertisement on Facebook or Instagram.

As part of the form, you can ask customers which products they’re interested in, when they’re planning to buy, the size of their team, which plans they are considering, etc. All these questions can be a factor in deciding who among your sales team is assigned that deal. When adding this information to Pipedrive, you can add this information as custom fields under Deals in Pipedrive.

Pipedrive Workflow Automation is a really powerful feature of Pipedrive and is extremely handy when assigning deals. As soon as a deal is added to Pipedrive, you can create an automation workflow in Pipedrive to decide to who that deal is assigned.

Most healthcare companies undertake sales territories design projects every year as part of aligning sales teams with business goals. It is because sales representatives have to physically visit the hospitals and doctors to educate them about the medicines in their portfolio.

Generally, sales territories are common for any sales team that requires salespeople to visit customers. Therefore, in such situations, it is important to allocate new deals based on location.

You can then assign these deals using Pipedrive Workflow Automation or using Mapsly.

Again, if you’re new to Pipedrive, click this link (affiliate) to get an extended FREE trial of 30 days when you create a new Pipedrive account.

Need help with automating deal assignments for your Pipedrive account?

Other articles on Pipedrive CRM that you may like to read

A collection of my opinions and how-to guides to help you make the most out of your Pipedrive CRM implementation.

Should you change the due dates of activities/tasks in a CRM?

The impact of changing due dates of activities/tasks in a CRM.

How to set up Pipedrive Activities for Productivity

Make the activities view in Pipedrive a one-stop place for all your sales activities to save time and focus on closing deals!

Tips to set up your Pipedrive CRM Account the right way

Tips to set up the right way without wasting time on unnecessary details.

Use Zapier/Integromat to set up deals the right way in Pipedrive CRM.

10 Productivity Tips to set you up for Cold Calling Success

A collection of tips to set yourself up for success so that you give your 100% when attempting cold calls.

Salient features and advantages of Pipedrive that make using Pipedrive as your sales CRM a no-brainer.

Thank you. I will respond within 24 hours.